I recently had a customer post a review about my customer service , basically saying that i was trying to up sell him the whole time . This wasn’t the case , I did up sell him on a ceramic coating via messenger but that was it. He contacted through messenger and  finally on the phone . I asked him different questions about the  vehicle and his concerns, Im assuming he gave me his best answers. His vehicle was a mid size pick up with light branch scratches and some interior work needed . This was his description.  The day of his appointment he shows up with the vehicle and it was in lack of other words , not as he described.  Not to say that he was lying or down playing his vehicle but consumers dont see vehicles the way detailers do . His vehicle did have branch scratches and while they were light on the surface they covered the entire vehicle . Also his interior needed more work than the interior detail package he wanted. So after talking with him , I tried my best to explain to him that based on the vehicles condition it would require more work , this happens from time to time.  I explained to him different levels of paint correction and why i thought he needed a better package to achieve the results he wanted. At the time we rescheduled the detail and he seemed to understand , a day or so later , I get a review saying that i tried to up sell him and that he took his vehicle to multiple shops and no one was even close to my prices. These points to me are irrelevant, Had i saw the vehicle up front like the other shops got to , my estimate would have been higher than just talking through messenger. Also it does not matter what one shop vs the other shop charges. You dont go to a steakhouse order a burger and then ask them to match McDonald prices . Not all detailers are the same and we dont charge the same rates.

Over the phone and via messenger , I did the best i could to give and accurate quote based on this customers description , no pics , no prior inspection like the the other shops had.  Again had i seen the vehicle in person in the first place my initial quote would of been about what my second quote was. Please give your detailer as accurate info and pics as you can . I  gave him  a quote that ended up being inaccurate for the reasons stated above . At the same time my mistake was not making it clear to him that pricing is subject to change upon inspection , lesson learned.

The point to this is , without seeing your vehicle there is no way to know exactly whats needed to detail your vehicle . There are also things that consumers dont think of or know how difficult they are to remedy . Please be open minded and if the pricing isnt what your looking for go to a shop that fits your budget. This customer came to me because he wanted a steak house detail , but in the end wanted it at a McDonald price. 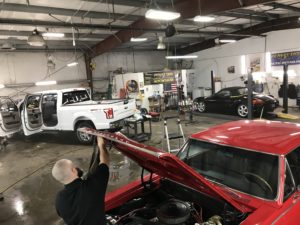